"There is a real risk that these negotiations will slip away, and that Yemen will enter a new phase of prolonged escalation, of the uncontrolled spread of COVID-19, and of severe and threatening economic decline," Griffiths told the Security Council in a briefing.

He said he still has hopes, but does not want to "sugarcoat things." 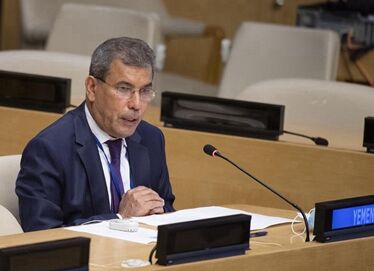 Negotiations aimed at a nationwide cease-fire, economic and humanitarian measures, and the resumption of the political process to comprehensively end the conflict, have been ongoing for four months. Both parties have provided feedback on various drafts and proposals. But they have yet to reach agreement on a final text, said Griffiths.

The process has been long and challenging. It has experienced bursts of momentum, as well as very significant hurdles, he noted.

This is perhaps normal for any mediation process that addresses issues of great importance to the parties. But it is important that both parties continue to engage in the process. The negotiations must be concluded before the window of opportunity closes, warned Griffiths.

The United Nations is committed to doing all that it can to support the parties to reach an agreement that puts Yemen on the path toward a peaceful and prosperous future, he said.

Griffiths called on all UN member states and countries that have an interest in the stability and future of the region to lend their full support to persuade all involved to move forward with speed to a successful conclusion of the peace negotiations.

But ultimately, the responsibility lies with the parties to bring these negotiations to a successful close. The coming period will test the parties' political will to bring forward a breakthrough, he said.

Griffiths voiced deep concern about the overall situation in Yemen.

The military situation has not improved over the past month, and the indicators on the economy are all pointing in the wrong direction, he said.

Food prices are rising. The currency is depreciating. Most Yemenis do not have enough money in their pockets to meet their basic needs, he said.

There are no quick fixes to Yemen's economic problems. But the parties need to agree on steps to keep the economy out of the conflict. It is the people of Yemen who suffer where the economy is weaponized and politicized, he said.

It is essential that all obstacles to imports and the domestic distribution of fuel and other goods vital for the civilian population be removed, he said.

There has been no progress with regard to the Safer, the decaying oil tanker that threatens to spill over a million barrels of oil into the Red Sea, he said.

Although the Houthi rebel authorities, at the beginning of this month, confirmed in writing that they would authorize a UN-supervised technical mission to the tanker, the United Nations is still awaiting the permissions necessary for this team to deploy, he said.