"As on 8:00 a.m. (local time) Wednesday, 34,193 deaths related to novel coronavirus have been recorded in the country," read the information released by the ministry. 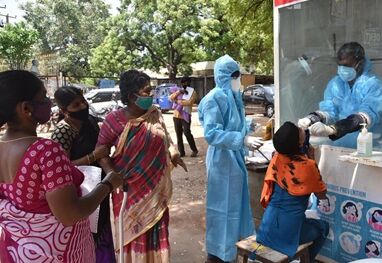 According to ministry officials, so far 988,029 people have been discharged from hospitals after showing improvement.

"The number of active cases in the country right now is 509,447," read the information.

According to a statement by the federal health ministry, coordinated implementation of "Test Track Treat" strategy by the Union and State Governments has effectively ensured that the Case Fatality Rate (CFR) is maintained at a low level when compared to the global scenario, and it has been progressively falling.

Presently the CFR stands at 2.23 percent and it is the lowest since April 1, it added.

The federal government is presently focusing on ramping up the number of tests carried out every day.

As per the figures of the Indian Council of Medical Research (ICMR), for the past three days the total number of samples tested is over 500,000 per day. Only on Tuesday Prime Minister Narendra Modi had announced that this would be increased to 1 million tests per day in the coming weeks.

Two days ago, Prime Minister Modi inaugurated three new testing labs which would help in increasing the number of tests by around 10,000 in cities like Delhi, Mumbai and Kolkata.

In the wake of prevailing COVID-19 conditions, the Indian government has decided to extend the existing restrictions on limited domestic flight operations and caps on air fares till November 24.

Currently, domestic flight operations are allowed to function at 45 percent of their total capacity.

Meanwhile, the country's capital city of Delhi has shown a significant improvement in controlling the virus spread. Compared to the situation in June, there has been a decline in the number of COVID-9 deaths. In June, around 100 COVID-19 patients used to die every day, but now it has come down to around 20 per day.

Earlier (in June), for every 100 persons tested for COVID-19 around 35 used to test positive, and this has come down to 5 percent now, according to Chief Minister Arvind Kejriwal.

In the second week of June, Delhi Deputy Chief Minister Manish Sisodia had expressed fears that the capital city would have more than 550,000 cases by July-end. But there has been a complete turnaround, thanks to the concerted efforts of both the Delhi and the centre governments.