AMMAN, Sept. 24 (Xinhua) -- Foreign Ministers of Jordan, Germany, France, and Egypt on Thursday stressed that the resolution of the Palestinian-Israeli conflict on the basis of the two-state solution is the path to achieve peace and regional security.

The ministers made their remakes at a meeting in Amman, which was also attended by the EU special representative for the middle east peace process, according to a statement by the Foreign Ministry.

The ministers stressed that the two-state solution should lead to the establishment of an independent Palestinian state on the borders of 1967. 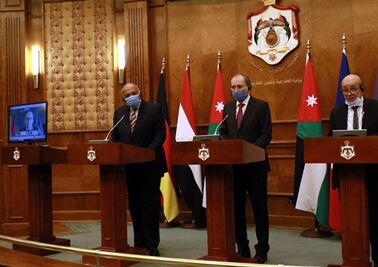 The ministers also voiced commitment to support all efforts to achieve a just, lasting and comprehensive peace that fulfills the legitimate rights of all parties based on international law, relevant United Nations resolutions and agreements, including the Arab Peace Initiative.

The ministers said that the building and expansion of Israeli settlements and confiscation of Palestinian structures and properties are a violation of international law that undermines the viability of the two-state solution.

The ministers said the suspension of the annexation of Palestinian lands following the announcement of the decision by the United Arab Emirates and Israel to normalize ties should become permanent.